You have to see it to believe it. A gymnastics video has been making the rounds of Leszek Blanik, a Polish gymnast who is known for his explosive tumbling skills. How explosive? Take a look for yourself. 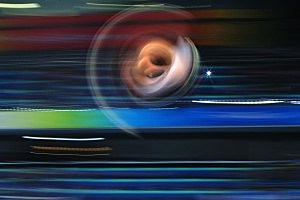 Not only does he get unbelievable height, Blanik has nearly perfect form. His legs are straight, toes are pointed, and he doesn't deviate from the center line down the middle of the tumbling mat.

Blanik put his explosiveness to good use in Beijing, where he won gold on the vault and became the first Polish champion in gymnastics. He also won bronze in the vault in Sydney in 2000. He hasn't competed since Beijing, and at 34 years old, don't expect to see him compete in London. Just enjoy this video and his nearly superhuman feats. Wow.